You can see below what we have cooked up for January at Space Exchange: 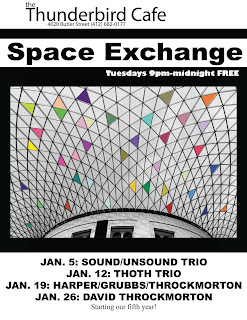 January 5 will be a particularly intense night for me. I'll first be playing at the Backstage Bar (first time in several years) with Thoth Trio, that's 5-8pm. Then I pack up head over to the Thunderbird Cafe to blow out the night with Sound/Unsound Trio, my group with Josh Wulff on guitar and David Throckmorton on drums. And of course, Thoth Trio the following week at the TBird. We premiered a couple of pieces on our last gig and I hope to have a few more pulled together for that one.

And it's all free.

As noted on the bottom of the image, this starts our fifth year of Space Exchange concerts. What a time it's been! I'd hardly have any work at all were it not for this. That makes me a little concerned that I'm being too complacent in locating more performance opportunities, but on the other hand it's been a great place to develop ideas and work with new people. We believe we've maintained a pretty high standard for our concerts and we intend to continue that for as long as we can.

Looking to the future, I have another performance of my Concerto for Orkestra planned for April 12 at the Kelly Strayhorn Theater. I want to first of all get it performed at least once more, but also hopefully record an even sharper performance for possible release. Mark your calendars (or whatever the digital version of that action might be) because, who knows if I'll ever get it played again?
Posted by Ben Opie at 7:43 PM