Billy Strayhorn famously grew up in Pittsburgh (although, he was born in Dayton OH!), and this year is the 100th anniversary of his birth. So, you don't hear much about Pittsburgh-based tribute concerts, do you? I've known of one or two, with no doubt more planned for his November birthday.

The First Fridays concert series, associated with the Frick Museum, wanted to have at least one concert dedicated to Strayhorn's music and legacy. So wouldn't you know it, one of the people in the organization is an acquaintance, and dropped my name as a possible participant. When contacted and asked if I could do a Strayhorn event, my response was like any good musician's offer of a gig: "Yes, I can do that."

Truth is, I've been a defender of Strayhorn's work for years. That's not hard to do, but there are those who still feel he basically copped Ellington's act. There's probably no question of Duke's influence on Strayhorn (though no more so than Gershwin or Romantic Russian composers). Research has finally started to untangle Strayhorn's works from Ellington's, as Strayhorn was often not given credit in recording notes. I recommend the great book Something to Live For if you're interested, and David Hadju's biography Lush Life is essential reading. While a great contributor to the Ellington organization and legacy, he was in many ways his own man as a composer.

So, Sept. 4, OPEK will play a program of mostly Strayhorn compositions. Follow this link while it's still relevant, for information. Get there early! These events are always very busy.

Did I mention it's free? Or at least, a requested donation. See you there, I hope!
Posted by Ben Opie at 9:19 AM No comments: 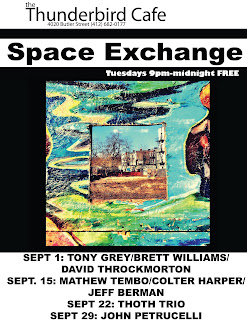 If anyone is paying attention, you'll notice I haven't posted here for some time. August saw some Space Exchange cancellations for reasons I won't go into, but we're back to almost-full force on September. (Fishbone is booked at the Thunderbird on the 8th, I could hardly stand in the way of that.) I myself will be just playing the 22nd. You can see for yourself what a great lineup this is, including the return of Colter Harper after two years in Ghana.
Posted by Ben Opie at 8:52 AM No comments: