Unlike listening to the entirety of Vingt Regards yesterday (just under two hours), I doubt I'm going to listen to this entire work today.

What a strangely obsessive work. I think it's reasonable to question why it needed to be as long as it is, clocking in at over about two and a half hours. That said, there is a wealth of ideas throughout the piece.

Each movement, unless I haven't listened to an exception, takes on a similar form: the composer introduces thematic material, and switches back and forth between his birdsong transcriptions and "original" material. Occasionally it's difficult to tell which is which, though I've seen the score previously and know that the name of each bird is written into the score.

It seems so odd that he most often used the piano, the most un-bird-like of instruments, to express the voices of birds. The question of just how accurately he represents birdsongs on the piano, or in general, is a question for debate. A former academic coworker was an expert on Messiaen. When the university wind ensemble played one of the birdsong works, he introduced the work with a short talk about this very subject.

Messiaen was often photographed in a meadow or field, staff paper in hand, transcribing birdsongs. This academic (whose name I won't provide, for other reasons) had studied some of Messiaen's original transcriptions and found names written in English. Messiaen only spoke French, refused to learn another language. What this academic person discovered was that the names were copied from a particular LP of field recordings of birds. He also said, Messiaen gets it right more often than not, that his transcriptions are convincing.

I will return to this topic in a future posting.

Much as the writing is very beautiful in this work, I'd say I generally prefer the Vingt Regards. It's broader and more varied in compositional scope. With so many birdsongs flying by, so to speak, I have to admit recalling only a few passages from previously listening to this piece. The second movement, "Loriot d'Europe", I definitely recalled. It begins with a lovely series of soft chords, interrupted by a birdsong (I assume the oriole the movement is named for) that I think recognize from here and other works. It's probably no coincidence that the loriot/oriole, and his wife's name of Loriod, would have meant a great deal to the composer.

With two more discs' worth of this piece, there's more to write in future postings. 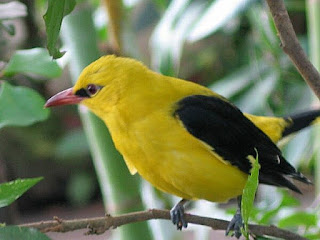