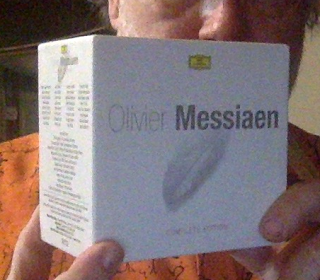 I've already written, here and on Facebook, about Messiaen recently. I've loved his music for years, and have been listening to a good deal recently.

So, I decided to spring for the 32-CD "Complete Edition" on Deutsche Grammophon. That title is deceptive, as there's a fair amount of his compositions not represented in this collection. It's everything that had been previously released on DG. I have a number of those, but at a bargain price and a lot of music I haven't heard before, I thought it was worth it.

So I'll be spending an hour each day going through the collection, and writing a few thoughts as part of a summer break/quarantine project.

The collection starts with an hour of solo piano music, performed by Roger Muraro. I don't really know anything about Roger. He can occasionally be heard doing a little of what Glenn Gould is famous for doing: humming/singing the line as he plays. Roger doesn't do it nearly as much as Glenn does, and I find it makes the listening experience more interesting. It's good to know he really feels  the music, and doesn't just play the notes.

I don't think I've heard the Préludes before, or at least hadn't paid close attention to it. It's an early work, completed in 1929, when the composer was about 20-21 years of age. Not surprisingly, the music doesn't sound uniquely Messiaen-ic. Occasionally there's a chord, or a chord sequence, or voicing that pops up where I think, oh yes, that's Olivier.

That's not to say it's a tentative or immature work, it sounds like French post-Romantic/Impressionist piano music. The work probably displays the influence of Paul Dukas, one of Messiaen's teachers. Most of the movements aren't especially virtuosic in nature, focusing more on tonal color. That attention to harmony coloration would be a consistent element of his music for his entire career.

La Fauvette Des Jardins (Garden Warbler) dates to 1970, and feels very much like a follow-up piece to his massive Catalogue of the Birds of 1958. I had to look through the listing of movements for Catalog, to be certain it wasn't a displaced movement from that larger work.

Compositionally it unquestionably resembles the various movements of Catalog: thematic statements, perhaps motifs, are interspersed with birdsongs. Although the work is presented as a single track, it sounds as though it has several movements to it.

The topic of birdsongs in Messiaen's music, and in particular using the piano to perform them, is something I'll have to address in a future posting.

It's an interesting companion to the 8 Préludes: one of the composer's earliest published works that clocks in at approximately half an hour in total, with a later period work that is about the same length of time. The first prelude is titled The Dove, but otherwise there doesn't seem to be any bird references in the work. In the later piece, he's fully immersed and invested in his birdsong transcriptions. It's probably a far more difficult piece to play than the earlier work. The early piece is a much more clearly tonal sound to it, although it doesn't sound tied to strongly to the idea of tonal harmony. The later piece? It's far, far more chromatic in nature, particularly the birdsong sections. But, even at this later time, Messiaen will still throw in a major chord or open fifth here and there.

That's one of the things I love about Messiaen's compositions. The world of his music can include serial systems and major chords. He can follow a chord with ten notes in it, with a major or minor chord, then an open fifth or octave, and it's all of one piece. (I'm thinking of Apparition de l'Énglise éternelle in particular, which turns up on disc 6 of this collection.)

Addendum: I wondered...I thought I heard of couple of coughs during the last piece on this disc. There's applause at the end. This was a live performance! Damn. Wish I could have been there.
Posted by Ben Opie at 12:12 PM