Back again. The beginning of book 4, "The Reed Warbler", moves with great rapidity.

I'm uncertain I have anything to say about these pieces apart from what I wrote about the previous disc, so I'll share related stories.

I haven't worked with Michael Pestel for a few years. I'm sure we will again. We had a group together, Syrinx Ensemble, that was dedicated to improvising in spaces with birds. Thankfully, Pittsburgh has one of the best (and only?) aviaries in the US, the (now-called) National Aviary.

Aside: I didn't grow up in Pittsburgh, but my grandparents lived in the North Hills. I remember visiting the aviary several times in my youth, it was one of my favorite places my grandfather would take us to visit.

One way Michael convinced Anthony Braxton to play Pittsburgh was to give him the opportunity to engage in some interspecies communication with the birds in the aviary. We all did two performances together, in addition to other Syrinx performances there. Michael, tENTATIVELY a cONVENIENCE and I, with a butoh dancer, also did a performance at the aviary that was beautiful as I recall.

I can tell you from the aviary performances, flamingoes (possibly dominant males?) respond to the lowest frequencies of the contrabass clarinet. Scrub jays are responsive in general, I recall to the clarinet. The aviary had a grey trumpeter that was highly acclimated to humans, known to pick food from kids' hands. He was unafraid to come over and mix it up with us.

Some years later, he and I did a performance at the Miller Gallery at CMU. He cut up pieces of Catalogue d'oiseaux, tossed them on the floor. Flute students acted like pigeons, fluttering about, reading pieces of the score. Then he and I swept them off the stage, and swept the score fragments away, using contrabass clarinets he had made out of brooms. It was so enjoyable, and the students really got into the spirit of the work.

Syrinx Ensemble did two gigs at the Central Park Zoo, that included playing in the tropical house and duck pond. Included on some of those gigs were flutist Robert Dick, and vocalist Caterina De Re. I've admired Robert for many years, his books on the flute are essential for any flutist/reed player/composer interested in the subject. He asked me to hold his flute at one point, so he could check his phone or something, and I said, "Uhhhh um okay!" It had at least ten extra keys or extensions of keys.

I'm attaching two photos below. The first is of Syrinx in the tropical room at the CPZ: Michael, me, and Robert left to right. The second is of me with Caterina. I'm not proud. I couldn't possibly look nerdier next to that presence next to me with the Thai finger add-ons. 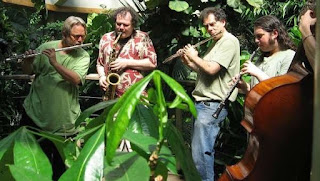 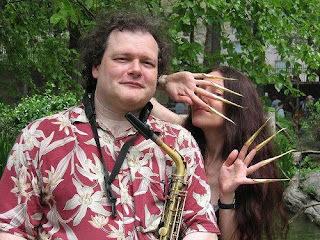