Mixed selection of more solo organ music from various times in Messiaen's career. Just as all the solo piano music was recorded by Roger Muraro for DG, so to Olivier Lautry recorded all the organ works.

I've generally paid less attention to the organ works because, as I've written previously, I sometimes don't find them to be some of the composer's most interesting work. That said, the third movement of L'Ascension was one of the first things by Messiaen that grabbed me. It was on an LP on Candide Records.

An aside: I'm not a completist, but if an album is on Candide, I will at least look it over. They released some standard classical fare (Mozart, Schubert), but also released some pretty significant modern era and avant-garde works. Messiaen, Stockhausen, Xenakis, Berio, Henze, Lutoslawski; decidedly not modern but unusual would be an album of Gesualdo; even an interesting collection of musique concréte works compiled by Ilhan Mimaroglu.

Back to this CD. I'm feeling the works on this a little more than some of the previous discs, though I still wouldn't rank most of it with the better piano works. I'm willing to admit that I probably just enjoy listening to the piano more.

Lautry plays wonderfully, as you might expect charged with recording the complete Messiaen organ repertoire for Deutsche Grammophon. I was wondering as I listened to this, if I would be able to start to hear his "hand" on these performances, distinctively from other interpreters? I suspect not as easily as I might hearing different pianists performing. Again, that may be on me.

I'm enjoying the early works on this particular disc. As I've also noted before, the music doesn't always have to be about drama, but they are the more dramatic pieces. I like that he's a pretty chromatic composer already, but will resolve to a major chord for effect. There's also some beautifully lyric sections to these work, such as the first and fourt movements of L'Ascension. Monodie, on the other hand, is decidedly not dramatic. It sounds a bit like an exercise to me.

Birdsong rears its head, so to speak, in Verset. I'm surprised there hasn't been more birdsong embedded in these organ works, but I still have several discs to do. I'll confess that this has been the first time since I started listening to these discs that I referred to the liner notes. I should probably be reading more.

The Messe...I do like the big, tone-clustery ending, but it's a pretty low-key work in general and I wonder again about the context of seeing this piece performed. 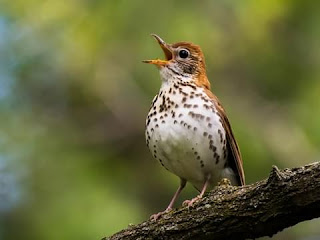