This album of shorter solo piano pieces spans most of Messiaen's career, making it an informative collection. This and I think everything else in the box set are repackaged separate releases, if my words move you to the point of seeking out the original issues. (Or hell, blow the money on the box set.)

From the opening note of Petites, you know you're listening to Messiaen. It's not the obsessive birdsong transcriptions, at least not for the first several notes. It's his choices of harmony that stand out here. This set of six short studies that are a bit like highly condensed versions of Catalog of the Birds, or the Garden Warbler piece I wrote about yesterday. He would have been in his 70s when he wrote these sketches, as he put it. If he's not going to sound like Messiaen at this point, who is he going to sound like?

A year or two back I checked out of the library a CD of new works by Steve Reich. I like Steve's music, and think Music for 18 Musicians is a critical work of the post-war (or post-post war?) composition. I listened to the recent works, and, well, it sounded like Steve Reich. It wasn't anything I hadn't heard from him before, but I thought, Steve Reich has earned the right to sound like Steve Reich. I think I like these sketches more than the recent Reich, but that's just my orientation in general I'd say.

The best known of the works on this CD, or at the least the most studied, would have to be the Quatre Etudes. Particularly the second movement, in English "Mode of values and intensities", was something of a model for post-war serialist composers. As one might expect, the four works don't sound so uniquely Messiaen-like, though he still manages to to maintain some of that lyricism I associate with his music. It doesn't sound as thorny or impenetrable as the serialized piano music of Stockhausen or Boulez.

I'm going to continue to write my thoughts on these pieces, but it's really all about the experience, is it not? I mean, that's self-evident. So when I write that Cantéyodjayâ, a work I've heard before, sounds more uniquely/indigenously Messiaen, what does that even mean? Certainly there's his use of harmony; some chords, progressions of chords, just sound like him. Even when he's not specifically composing one of the bird pieces, birdsong-like passages seem to happen anyway (even in the Quatre Etudes). All of these works sound more (generally) challenging and virtuosic than the earlier 8 Préludes I wrote about yesterday. He was not afraid to write hard music! But, importantly, not impossibly difficult music. Being an organist himself, and married to a virtuoso pianist, I sure he was well aware of the technical range and limitations of the instrument.

The remaining works on his collection, although spanning several decades, all some extent find Messiaen at his most "classical", if that even means anything. That's going to happen if you compose a rondo, for example. The two works from the 1930s definitely demonstrate that he's establishing himself as having a unique compositional voice at a fairly young age. He's not yet out of his 20s, and there are passages in both pieces that sound like they could have fit inside music later works.

Birdsong has already come up several times in these first two discs, but something that hasn't is his Catholicism. That changes tomorrow. 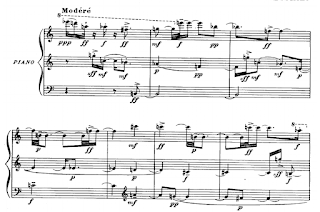