It is all one piece, so I might as well knock this off in a day. That makes it sound like drudgery, I do genuinely love the music and am enjoying digging into the Messiaen library more deeply than ever.

With the addition of the Olivier Messiaen: Complete Edition to my personal library, I came to realize that I have four recordings of this composition. I've never A-B'ed any two or more of them. The one difference I can tell is the tempo of the opening movement.

Not that it matters, but I have it on vinyl played by Michel Béroff; I bought that at a record sale held by WQED; pay $5 and take away as much as you want. I took about forty records/sets, and I don't think I was being greedy. There's a card on the front to log in all the plays it received over the air. One movement was played one time.

I also have the version released on CD on Melodiya (!), and a more recent performance by Pierre-Laurent Aimard. He's supposed to be the authority on this work, and I've heard of him taking the stage and playing it by memory.
A casual search online will show that this piece has been recorded many times. If I actually was to seek out another, it would probably be that of Yvonne Loriod, the composer's wife. She was also known to take the stage playing her husband's works by memory. This piece is dedicated to her.

Roger Muraro has been the pianist on all of the piano music so far on this box set. I don't know how much better Airmard is, I'd have to study both recordings with the score to have any idea.

And I have a copy of the score! It was sold off by the University of Chicago library, from the estate of Easley Blackwood. My friend Rob bought it for me. I thought, well, it's at the library, do I really need a copy? Now with all the libraries closed,  I'm thrilled to have that score and others. It's falling apart but complete. There are fingerings pencilled into one movement, so he must have played and taught some of this piece in his courses.

Blackwood was a respectable academic composer himself. I've heard pieces I liked, some that didn't move me. Rob sent me other scores as well, including a copy of Iannis Xenakis' Achorripsis. Inside the cover, written in Easley's hand, it reads: "Incredible that this 'composer' was ever taken serious." !!! Love it. Xenakis was one of Messiaen's students, though it boiled down to the teacher saying, "You need to use your mathematics for your music." (Not verbatim.) I'll admit that I don't find Achorripsis to be one of Xenakis' more exciting works, though I consider him to be another of my favorite composers.

I'm writing this text as the recording plays, and the music has come to a slower, more contemplative section. "Kiss of the infant Jesus." It's beautiful. (Just so happens, this was the movement that received a single play in WQED on vinyl.) And while I hate to point out a tiny portion of the work, the last 45 seconds of the previous movement (#14) is my favorite passage in the entire work.

I'd really like to see this performed some time, but I guess I have plenty of recordings until then.

I see that the next three discs are devoted to Catalog of the Birds, and then on to the organ works. 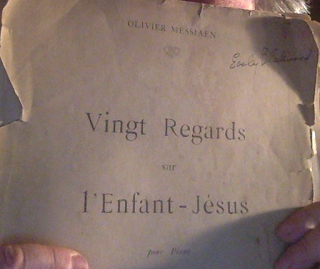