I connect these blog posts to Facebook, which is how most people see them. It's the most I've written in years, and I've never attempted to write a book. I never thought I'd be able to tackle a topic that wasn't already covered in existing books.

When I sit down and write these blog posts, I know that to some extent I'm prattling on about a composer I happen to like, working through a large collection of his works. One reason I'm doing it is to be certain that I actually listen to the entire collection. It would have been easier to skip straight to the pieces that I know I like, or hadn't heard before.

It's also a summer project.

I had my summer all planned. I usually teach pre-college at Carnegie Mellon every summer. I forget exactly how many now, 12 of 13 years? 13 of 14?

While my summer schedule is decidedly not intense, I thought I would take this year off anyway. However, I'd try to keep a disciplined schedule: walk to school weekdays, put in a few hours composing and arranging in my office (I have an office for the first time as of January), walk home. I'd be sure to get a little physical exercise every day (goodness knows I need it), and try to maintain a regular creative work schedule. I'd been very irregular with the latter in recent years.

I don't want this blogging to be just busy work for myself, a diversion, but part of an attempt to keep at various projects on a regular schedule. I'm not quite half way through listening to the box set, so there's going to be a good deal more writing.

I think Messiaen is an excellent composer to experience in this time. I'm not alarmist when it comes to the pandemic, but I am careful. Nonetheless, I do find myself unsettled or even frightened about what's happening from time to time. And that was before George Floyd was brutally and callously killed by a police officer in full view of camera phones. And the aftermath of that video being released publicly. The world appears to be in a very bad place right now.

I guess I've written this before, but it deserves repeating. I love Messiaen's embracement of beauty. I'm certain many people wouldn't consider his music to be beautiful, but I do. I don't share his Catholic mysticism, but I do believe in his attempt at creating transcendental beauty. At least, that is how I interpret his work as a whole.

I don't mean to block out the chaos and ugliness in the world, I just think we all could use more of that transcendental beauty. Spending an hour a day listening to any great composer? It seems like a positive thing to do.

I haven't written a word about this disc so far. I don't think there's much to add from yesterday's post. I'll point out that the tenth movement, "The Resurrection of Christ", bares more than a passing resemblance to the the early, classic Apparition de l'Église Éternelle. It's looser and more cluster-y, but unquestionably similar.

While listening to this set, I've generally avoided referring to the liner notes, or looking up the titles of the various movements of multi-sectional compositions. Maybe those things would offer some insight as to the thinking behind each movement. I wanted to listen to each work just as pieces of music, not necessarily expressions of Catholic faith.

The next two discs cover his, I guess, oratorio: Le Transfiguration de Notre Seigneur Jésus-Christ. It's the first of his large ensemble works presented in this set. 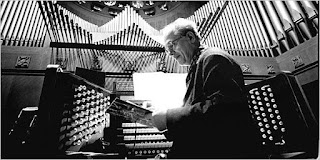