Full and not particularly interesting disclosure: I have a vinyl copy of this. I was thrilled to find a $5 copy, and I should have known better. It's warped to the point where, for some reason, only the second side is playable. I'm streaming this through the Hoopla app (which I recommend) but looking at the cover of my physical copy.

I admit it, I love vinyl. I love the physicality of it. I love the graphical presentation, the size of the image on the cover. I love how the medium has been manipulated: colored vinyl, concentric groove records (I was watching a documentary series today on Monty Python, and this came up regarding Matching Tie and Handkerchief), grooves that play from the outside in, or one of the most extreme examples being my friend tENTATIVELY, a cONVENIENCE's "Audio Obstacle Course", which is the audio cut to play outer edge in, AND inner edge out, superimposed. Wow! I had never thought of that. We all know the rpms: 33&1/3, 45, 78; how about 16 rpm? 8rpm? I have at least one of each of those too.

I know I haven't said anything about the music on this record yet. It's coming.

If you want more examples of vinyl and cassette extremes, check out this article on the Conglomerate Records collection I bought. The first item was a composite record glued together from multiple cut-up records. https://anomalyindex.com/2020/07/17/unsolved-mysteries-conglomerate-records/

So....Exorcist II. Among the most maligned of all sequels. I listened to a podcast by The Projection Booth about this film, with several people defending it passionately. I later watched it, and, well...I don't think it's as terrible as its reputation would indicate, but it's definitely not as great as the superfans might have you believe, in my opinion.

What is very clear is that nobody counted on director John Boorman making a film that was so markedly different from its origin work. The superfans speaking in defense of the film in that podcast do make a good point though: Exorcist II is a very controlled film, it's not a train wreck. The color scheme is very limited. The filmmaker knew what he was doing.

I think part of the break from the original film also involved hiring Morricone to score this. I wonder what he thought of it all, but he'd scored trashier films than this before.

There's no sign, as far as I can tell, of Edda Dell'Soro here. There are prominent female vocals a few times, particularly in the strangely-titled "Little Afro-Flemish Mass" and "Night Flight."

There are two primary themes throughout the score: the Regan theme (pretty, minor melody) and the Pazuzu theme (nasally vocals, stranger). The latter theme plays into "Magic and Ecstacy", which was covered by Snakefinger on his debut LP Chewing Hides the Sound.  That's where I heard it first.

You know what's not part of this score? Mike Oldfield's Tubular Bells. That's the primary theme of The Exorcist. It's an eerie and affecting theme to be sure. But it's not original music, and sometimes I find that to be cheating. I'm looking at you, Quentin Tarrantino! For that matter, Martin Scorsese relies on pre-existing music too often.

From a listening standpoint, the ending of this record is no less of a head scratcher than anything else on this project. The final three tracks: "Night Flight", an intense work for orchestra and voices. Follow that with "Interrupted Melody", possibly the sweetest moment on the soundtrack, and then "Exorcism", orchestra clusters and voice, percussion, almost recalls the Pazuzu theme. It's under a minute and then it's gone. What?

I've just re-ordered an interview book of Morricone, and I wonder if he has anything to say about this one. 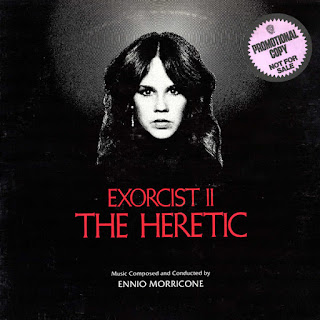