There's quite a bit of Morricone that sounds like this score, and I love it all. Dark, atmospheric, atonal strings and winds with a groove bass. This one's especially dark.  There's an opening theme, minor but sweet, lovely oboe melody with wordless vocals (surprise). Closing theme is the same, and then it's entirely horror mood music in between. I have several that are somewhat similar so I'm spacing them out. A good deal of the Crime and Dissonance collection is of the same vein, though this one might be even more extreme in general. There's a cue featuring whistling with high cluster strings that's almost Xenakis-like.

Edda Dell'Orso is once again credited with vocals, as with Veruschka. I suspect this won't be the last time before I'm through with my Morricone collection. Credit is also given to whistler Alessandro Alessandroni, and conductor Bruno Nicolai. Nicolai is a composer in his own right, but I think I've seen his name on other Morricone projects as conductor. I guess Ennio was too busy scoring five other films at the time to conduct this himself.

It's not that important, but I remember specifically where I bought this. Dave's Music Mine on the Southside was going out of business, and I wanted to visit one last time. They were offering a BOGO. I was struggling to choose anything that I wanted. I found this in the RSD section, added a Merzbow record (because I could), and that was my final purchase there.

It's pressed in snazzy orange marbled vinyl. So many things are pressed in colored vinyl now that I try not to be impressed by that, but I still like it.

I'm usually not super-fussy about these things, but the pressing and mastering sound really fine. It probably helps that, as a discogs.com reviewer wrote, the longest side is just over thirteen and a half minutes in length.

I've been reading that the film is an excellent and very creepy horror/giallo. I hope it's available for streaming. 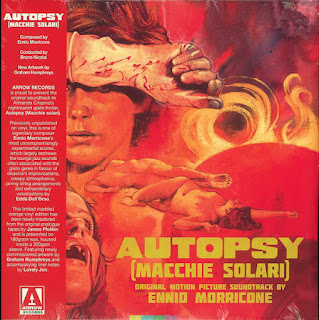