Ennio Morricone died yesterday at the age of 91. To say he packed a lot of music into those years is an understatement. Approximately 500 film scores? Plus he did some composing of concert music and conducted his works.

So why not follow up my big Messiaen project with a few words about some Morricone recordings? I count that I have twelve albums on vinyl (one a collection) and also have a few CDs somewhere around here.

Like my Messiaen posts, I'm not offering anything resembling serious musicology or even critical review. Just one person's thoughts as he listens to these things, an excuse to dig into a particular artist's work more deeply and write some thoughts along the way.

As a composer, these is no one Morricone. There are of course those wonderfully colorful scores to the Leone westerns. There's the lushness of The Mission and Cinema Paradiso. There are the crime and horror scores of the 70s, employing grooves, improvisation, and often atonal strings. Yet, if you listen to enough, you can hear his hand on much of it.

I recognize the phenomenon of listening to soundtracks as a separate experience from the visuals of a film. It's how the music stands up that interests me. I know of scores that work beautifully with the film but are not especially interesting when heard separately. I'd put Silence of the Lambs in that category. There are probably scores that outshine the films, or at the very least are at a much higher caliber than the rest of the film. Ronald Stein comes to mind, whose scores for Attack of the 50 Foot Woman and It Conquered the World are quite good work.

So I'll dig on some Ennio. First up: The Chosen (AKA Holocaust 2000 AKA Rain of Fire). It's a 1977 film starring Kirk Douglas, an engineer building a nuclear power plant in the Middle East, who discovers his son is the Antichrist. (!!!) It's what I read, folks.

I hate to continually use the words "weird" or "odd" when describing the music. His scores are an odd mix sometimes though. A lush, sweet theme, some atonalism, often quite a bit of vocalise. There's some wordless, female voices a few times here ("Visions of the Holocaust [Main title]") that recall the voices on "Magic and Ecstasy" on the Exorcist II soundtrack. At other moments I find it similar to the score to Brian DePalma's The Untouchables, in my estimation a just-okay film with a lesser Morricone contribution. (The use of synthesizers in that work seems very out of place, and ultimately dated now.)

By the way, I surely can't be alone in considering DePalma one of the most overrated film directors. That will ruffle some people I'm sure, and discussion for another time maybe.

Back to The Chosen, it's very good but is not one of the more interesting things I've heard from the composer that stands up to listening apart from the visual experience. With around 500 scores, many of them are going to sound soundtracky, right? This work was never reissued on CD, and the vinyl cover comes in two colors. It was released on Cerberus Records, with a noting that it's an Ennio Morricone Film Score Society release. I'm not going to bother checking whether it's on anything like Spotify, but my guess would be not.

How many scores did they help release? About twenty of discogs.com is any true indication, a few of which have since been reissued.

And how many of his scores have seen audio release? Definitely not all of them. And is that such a bad thing?

I might have to hunt down a few more at Jerry's Records, where I bought this. 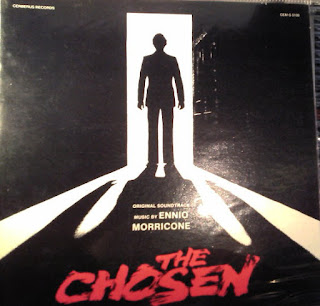