Today's platter spin: Giù la testa, AKA Duck, You Sucker! AKA A Fistful of Dynamite AKA Once Upon a Time...The Revolution

One of two Morricone western movie soundtracks in my vinyl collection. I've come to realize that I've seen few of the films associated with the Morricone soundtracks in my personal collection. I haven't seen The Chosen; my friend hipped me to Veruschka-poesia di una donna being on Youtube, but I haven't watched it entirely yet; I've seen just a few minutes of this film. I'm going to have to do better in this case. I know there's more soundtracks coming of which I've not seen the original film.

This one's from another Sergio Leone western. I think like many people, I'm not generally a fan of westerns, but I like those by Leone I've seen. Specifically, the so-called "Man with No Name" trilogy with Clint Eastwood.

Let me make an aside here, since it's only slightly off-topic. The Good, the Bad, and the Ugly is the most epic and lauded of those three films. And it's a great film. But I love how the plot and soundtrack music intermingle in For a Few Dollars More. The character El Indio has a pocketwatch that plays a music box melody. It's a beautiful, simple melody, clearly played on celesta. He gives another character the point when the music stops to draw his gun. Eyes lock, Leone-style. The celesta gives way classical guitar...then organ...than full orchestra with a prominent trumpet solo...then back to the celesta. It's one of the most effective convergences of music and plot I know in cinema.

Morricone is Morricone for sure here. Musical cues vary between lush orchestrations, weird cuteness, and outright bizarreness. Take the "Marcia Degli Accatoni" (I think). It starts with contrabassoon and a male voice uttering "mwah" in a frog-like tone. Enter, a bass recorder or ocarina of some sort. Add some strings and guitar, some sopranino (I'm guessing) recorder, and he even quotes Mozart's Eine Kleine Nachtmusik along the way. It would be disappointing if he composed a Leone western score in 1971 without having something this strange in it. Elsewhere in the cues there are also whistling, wordless or other nonsense syllables ("shum, shum, shum"), and some sort of electric or electronic keyboard (wasn't certain if it was a clavinet).

One of my unrealized projects, specifically for OPEK, was a performance of music entirely drawn from film soundtracks. I already had arrangements of cues or themes from Taking of Pelham 123, Last Tango in Paris, Godzilla vs. Mothra. As I'm listening, there's a long track in the second half of the score, "Invenzione per John," that might have made an interesting arrangement for that band. It wouldn't exactly be a representative Morricone work, but then, I'm not sure any other piece is either.

Just after writing that, I read on the Wikipedia page for this film that Elvis Mitchell loved this score and made special mention of that particular cue as well. It is quite beautiful, so of course the next track on the album is the most jarring.

I bought my copy at Jerry's Records, to the surprise of nobody who knows Jerry's. I think it was an unsold auction item that he let me pick out his bins before putting it out on the racks. I could be wrong about that. I remember fewer and fewer circumstances where I bought my records. I still love Jerry's Records but I miss having Jerry himself there!

If I was making my mixtape of Morricone favorites, I'd definitely pull a few selections off of this one. 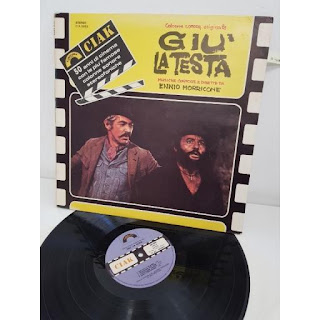