On the turntable this evening: Sacco & Vanzetti 1971 on RCA Victor

This was a recent purchase at Jerry's Records. I noticed it in the racks. My internal monologue: "Hmm, Sacco & Vanzetti? Maybe. 'Lyrics by Joan Baez, Miss Baez sings 'The Ballad of Sacco and Vanzetti'? I don't know. Credits include Sinket? Sold!"

What's a Sinket? More properly it would be Synket or Syn-ket. It's an early (designed around 1961) voltage-controlled synthesizer. It was never intended for commercial production, and only a limited number of models were produced. To see pictures of the instrument, it's amazingly compact, much more than the later Moog Modular systems. The name most closely associated with the instrument is that of John Eaton, an American composer who composed for it. Walter Bianchi is credited as playing it here. On one track, he's credited with playing "electronic keyboard", which might mean it's more of the same. After buying this LP, I learned the instrument appears on several other period Morricone scores.

Ah well, beyond anything else, I'm certain the producers of the film thought Joan Baez' name would help sell more tickets. I can't blame them for that. Nobody's going to rush to the theater because there's a Sinket [sic] on the soundtrack, and few people besides me are going to buy the LP for that reason alone. There's a menacing Synket sound that arises in the middle of "To Die is Duty" that sounds great without being too distracting.

There's a single track, "The Electric Chair", that's all Synket.

I previously mentioned The Untouchables. I'm not a big fan of Morricone's score on that one. He relies a great deal on (I assume FM) synthesizers for much of the content of that movie, which is set during the Prohibition. That is a conflict that grates on me. They go to great lengths to try to recreate the period in costume and setting, but the score relies on far more current technology for the music. Technology that now sounds dated. I bring this up again because, well, I like that there's Synket on this soundtrack, but I wonder if it sounds out of place with respect to this period piece film. I guess it makes sense that it would represent the electric chair, though.

I find things to enjoy on this LP, but unfortunately more than half of the content involved Joan Baez in some way. Another one for the mix tape I guess. 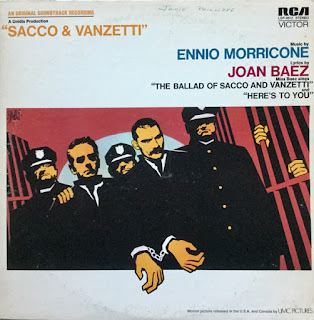