Final disc. Here we are.

I've affirmed my preference for Messiaen's music in the 1940s, so I was unquestionably looking forward to Visions de l'Amen. I know I've listened to this work before, but not after having immersed myself in the composer's works previously.

It's scored for two pianos. Considering what he expects a single pianist to do in pieces such was Vingt Regards, it would be reasonable to question the need for two. It's a very busy work at times. Unlike any other recording in the set so far, I definitely detected an edit in the recording. There's no shame in that, I'm just a little surprised it was as obvious as it was.

I looked at the credits, and I see this recording is played by the composer and his wife. I'm assuming if there's a more difficult part, it's Yvonne playing it.

Listening to this after 31 other CDs of Messiaen's music, it clearly sounds like it's a 1940s work. Vingt Regards comes to mind, especially on the first movement here. The first movement in each sets up in a similar way, and that same material pops up again in subsequent movements. This is a few years before Messiaen would compose what is considered to be the first completely serialized work, abstracting all materials from the very idea of themes, thematic development and repetition, variations, and harmonic progressions.

Again, I'll emphasize, those things are necessarily important. I love much of Xenakis' orchestral music, but you're not going to hear much in the way of thematic material in those. He's in a different category altogether though, in many ways.

Messiaen doesn't do sound-mass the way Xenakis does. And I don't expect him too. Olivier tried his hand at musique-concréte, but ultimately rejected the results. (I still want to hear it!) He'd never create anything like Stockhausen's Hymnen. I love them all for who they are.

It's strictly alliterative, but my opinion is that every jazz musician needs to study the 4Ms: Monk, Miles, Mingus, and Messiaen. The first three make up several of the very pillars of jazz innovation, along with many other names: Armstrong, Ellington, Ornette, Sun Ra, Braxton, Ayler, I could go on. But Messiaen?

Definitely. I know he's so very European. But he has ideas about rhythms, scales, modes, forms, worth considering. I also consider the writings and/or interviews of Cage and Stockhausen to be essential, even if you disagree with every word. Consider the alternatives.

While we're at it, there's a book I recommend everyone read: Improvisation; Its nature and practice in music. It's written/compiled by Derek Bailey. He interviewed improvisors in various idioms, including flamenco guitar, jazz, rock, Baroque organ. He even interviewed Earle Brown, a so-called classical/avant-garde composer who allowed for improvisation, and Gavin Bryars, an improvisor who turned to through-composing.

It's been a while for me, I should return to it.

I'll return to this blog, maybe I'll even write about more box sets. I have the 10-CD (pre-Rahsaan) Roland Kirk box, for example, or Xenakis, or several Miles box sets, or maybe not.

Chants de Terre at de Ciel. I haven't heard this before. I mark off 1940 as the "golden period" of his work, but this is pretty great, I have to admit. It dodges around tonality/atonality, periodicity/irregularity.

I know I love the 1940s works. If I revisit anything, it's his works from the 1930s I should reconsider. I think listening to them in chronological order would definitely color my opinion. The 1940s didn't just happen for him, there was a development along the way.

I'm going to be spending more time with the vinyl I've recently bought, I know that much. Duquesne University sold its vinyl collection to Jerry's Records. It's a lot of standard classical recordings, but I have been buying up the avant-garde vinyl when possible. Stockhausen, Zimmermann, Kagel, Eaton, Nancarrow, etc.

I read that Messiaen liked brightly-colored shirts. I'm on board, man. 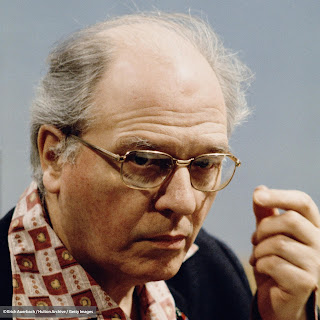