I started this last night but didn't get to the second half until today.
I'm sure this movie is garbage. It's an updated telling of the story of Bluebeard, who marries and kills. And who has he killed? Virni Lisi, Marilú Tolo, Agostina Belli, Karin Schubert, Nathalie Delon, Sybil Danning, Raquel Welch, and...next is Joey Heatherton! Whatever what will she do?

If you do a web search on this film, you'd probably come across Roger Ebert's bizarre review of it. It probably wasn't enough for him to say the film was a piece of shit, or that Richard Burton is terrible in it. (He says something about Burton's decline as an actor, even in 1972). He focused on Joey Heatherton's mouth, how it almost never closes. I suspect Pauline Kael's influence, for better or worse.

Richard Burton is a complete ham. I don't care about his pedigree. I really liked him in 1984, his final role, for the same reason a friend didn't like him. I found him understated and menacing, he thought Richard was boring.
In a previous post I mentioned Ronald Stein, how his scores were sometimes of a higher caliber than the films they supported. We're probably in that territory here with Ennio. It's nicely creepy at times, somewhat recalling some early 20th century composers.

Morricone soldiers through on this project. Do I hear some version of a hammered dulcimer in there? Or hammered open piano strings? He's in a more "classical" mode through much of this, even if he still demonstrates his love for unusual instruments. From the standpoint of listening to this album as a discrete work apart from the film it underscores, there's a jarring moment when it goes from moody, somewhat clustery string with minimal piano...to a ridiculously upbeat studio orchestra march. I have to wonder about the context.

This is another release by Cerberus Records, in their Ennio Morricone Film Score Society series. It looks as though most, but possibly not all, of the releases in that series have been reissued on CD, and in some cases deluxe new vinyl. Now I wouldn't mind finding copies of the ones that apparently haven't been reissued. 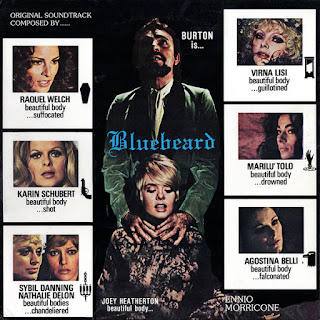