I think there's a chance I saw a few minutes of this film once, but that's at most. In 1970 Clint Eastwood was still making westerns, only it's an American production this time. He turned down a role in Giú la Testa, not wanting to be in more Italian westerns. He's second billing this time, with the top billing going to Shirley MacLaine. IMDB notes that it would be the last time he'd receive second billing for over two decades, and likewise appear opposite a bona fide female star even longer.

Knowing a little bit about his history with women, and particularly Sandra Locke, I'll leave that where it is.

The opening theme is signature Morricone. There's a mule braying represented by (what it think is) a piccolo note followed by a bass harmonica. (Later the same idea is played out with a piccolo followed by marimba.) There's some recorder, and it leads also to a church-like choir. He's already telling you something about the film by these various musical events built into the mail title theme.

The score overall is a bit conventional, which is not to say bad. It's acoustic guitar-heavy. There's something about those Leone westerns, and Morricone's contribution to them, that really stands apart from any supposedly similar films/scores. 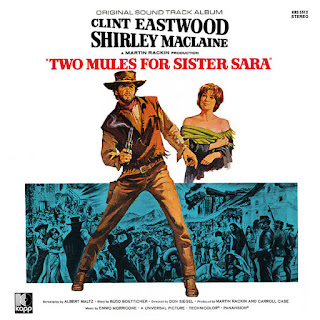