I've previously mentioned the Crime and Dissonance double-CD collection. (I will at least one more time before I'm done with this series of posts.) To recap, it's all generally the strangest cues from Morricone soundtracks. Most of it is 1970s, and many from giallo films.

This film soundtrack is not represented on that collection, but I knew it would be somewhat similar. 1971, giallo, no question. And to add to the weirdness, the opening title theme is a pop/lounge sounding piece that the text on the obi compares to Serge Gainsbourg. Edda Dell'Orso is back on her breathy, sometimes wordless vocals. Just how many of these projects did she do with Morricone? I was looking at her credits on discogs.com, and after twenty original soundtrack listings, I stopped counting. Bruno Nicolai is also back conducting, similar to Autopsy. I have one of his soundtracks, I'll have to pull that out soon.

This soundtrack has a lot of what I love about 1970s Morricone. It's thick with atmosphere. While much of it is clearly through-composed, I suspect there are times when there's structured improvisation as well. There's a looseness to some of it that just doesn't sound tightly composed and performed. I would have loved to have asked him about that. I'll have to get his book out from the library.

What are some of the components this time? Harpsichord, muted or prepared piano, out of tune piano, high string clusters, grooving bass/drums rhythm section, pitch-unstable keyboard, fuzz bass, vibes. Sounds like something I'd listen to even if it wasn't an eerie Morricone giallo soundtrack. And then he pulls it back to that poppy opening theme a few times.

I really like the Death Waltz/Mondo label, but it's an expensive habit. Single LPs sometimes go for $30. Waxworks is another similar boutique-level soundtrack vinyl label, and there are a few others. They're beautifully packaged, often with attractive colored vinyl (disc one on this one is yellow splatter, disc two red splatter), heavy (and sometimes gatefold) covers. Some editions sell out quickly, but you never know which ones. I haven't bought anything from them in a while but some of those other Morricone releases look tempting.

I'll admit there are a lot of period Morricone scores that sound similar to this one. But it's a good one nonetheless. 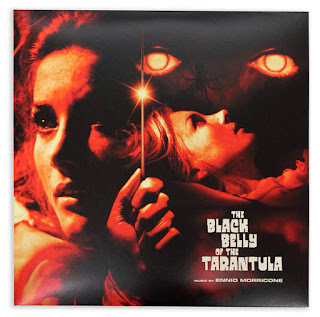 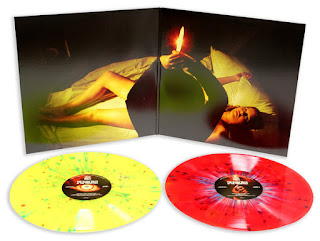