Another soundtrack tonight, but a break from the Morricone. One of my favorites is coming, possibly tomorrow.

I remember this popping up on the Death Waltz/Mondo site, and selling out pretty quickly. I can't recall where, but I later found a used copy of it and snagged it.

I don't think I had noticed at the time that this work is by Pittsburgher Steve Moore, also of the band Zombi. I don't know Steve myself but we have mutual friends. I've seen Zombi just once, as the headliner at an old Flux event. They have a way of making a big sound for two guys.

It's my understanding that the name Zombi, and their initial musical inspiration, comes from Italian horror movie soundtrack music. So there is a through-line from some of these films to this band, and this particular work. The film Zombi was scored by Fabio Frizzi, as was several other Lucio Fulci films. I like Frizzi's work and I'll have to put one on again soon. Steve and Zombi's music comes much closer in spirit and sound to Frizzi's music than to Morricone's, to be certain.

With that information in hand, this soundtrack is along the lines of what I'd expect. Lush synth soundscapes, musical minimalism. You can make an argument that sometimes Morricone and Bernard Herrmann wrote film music that could sometimes compete for your attention from the film, rather than complement it. They certain push that line at times, but it also makes for a more interesting listening experience separately from the film. Based on listening to this (without, again, having seen the film) I'd say Steve possibly wants to sit in the background a little more, be more like atmosphere.

This would be lazy record reviewing, but I'm not a serious reviewer, so here goes. The music sounds less like Fabio Frizzi than maybe Phaedra-era Tangerine Dream. Even that's not fair to write, as TD could be kind of wooly and even a bit sloppy at times. TD of course has done many soundtracks, but the lineup has changed so many times, it's almost not fair to consider it to be the same band. I've never heard it but I'd be most interested in their work on William Friedkin's Sorcerer, with the classic Frose/Franke/Baumann lineup.

Another soundtrack I liked on Death Waltz that's vaguely similar is Sinoia Caves' Beyond the Black Rainbow. I have seen that film, and the soundtrack works not only as supporting mood, but also as literally the soundtrack in a promotional film that appears within the film. 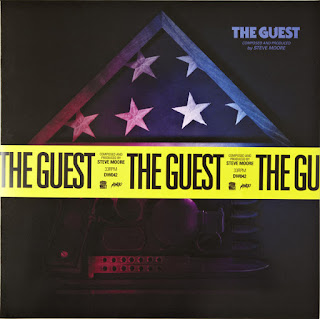