Leaving Trump and the current world behind, hitting the mid-way point in this box set of CDs, I have come to Messiaen's opera, St. Francis of Assisi. The first of four discs, the largest work by far.

It would come as a surprise to nobody that I am not generally a fan of opera. And I think I can express the reasons.

First is the period of grand opera. Opera as a form dates back to Monteverdi, and it was an innovation at the time: combine acting, staging, text, vocal and instrumental music, all in one art form. Opera reached its heights of popularity and influence in the latter half of the 19th century, music that generally doesn't move me much. When one thinks of opera, is it Mozart? Or Debussy? John Adams? More likely Verdi, Puccini, Wagner. Latter period Romanticism. I don't deny those mens' talents, I'd just rather listen to something else.

Another reason: well, I've always had a bias in favor of instruments over singers. That's not to say I hate singers, but more often than not I'd rather they got out of the way so I could listen to the rest of the band.

Then there's the broad style of vocalization practiced by most operatic singers. I understand the need: projection first and foremost. One singer on stage, orchestra in a pit below, large concert hall, pre-electric amplification, you need to be heard and understood. That requires a very particular skill set. But I don't have to find it attractive in sound. I prefer a less broad style of vocalizing in general.

And finally, I really don't care about telling a story in music. Musical works can be highly (here I use the word again) dramatic, but I'm disinterested in telling a specific story.

So I come to this opera. From the first measures, he accepts that this is an opera in the traditional sense of singers/ensemble/staging/acting etc. But there's no overture. No arias. I want to say we're in Francis' world immediately, but I'm not following the libretto in any way.

The first disc is broken up into smaller tracks. I can hear him working over musical ideas, even if I have no idea what the libretto is. Melodies and harmonies appear, recur, are worked over. the relationship between the voice of St. Francis and the ensemble is at times conversational, sometimes at odds.

I've made the point before, but every measure sounds like Messiaen.

This is the first disc in the set with ondes Martenot on it. There are three. More on that later for certain.

As far as I can tell, it's mostly St. Francis in the narrative on the first disc. I'm about 3/4 of the way through it when Dawn Upshaw appears as the angel. As I'm listening to the recording, a song sparrow was singing outside the window, oblivious to humans. It seemed right.

There are three discs to go. I will listen to it all, I promise. 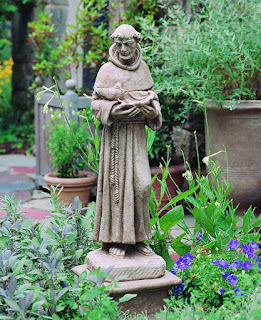