Why am I doing this? Listening to this music, writing thoughts in a blog? Is this a constructive use of my time? Shouldn't I be writing about current events, or doing something about them?

Of course those things concern me. It's all too much sometimes: Covid-19, high unemployment, police brutality, a supposed president who still commands the adulation of about a third of this country, despite being a snide, bigoted, ugly, cheating, corrupt man-child.

For my own mental health, I need to leave those things behind sometimes. I have been trying to consistently get composing done (with some positive results), pick up an instrument now and then, stay on a more disciplined schedule. This listening and writing project is part of that schedule.

If there's a music that helps me leave the world behind, it's Messiaen's work. I know I can leave behind this Earthly plane for an hour a day. (But then I've chosen to write after each disc, and I'm back again.)

Maybe it's all self-serving, maybe I have no new insights into this music. So be it. I make this blog available to read, but I don't really expect anyone to follow it.

This particular disc has three large ensemble compositions, performed by the Cleveland Orchestra conducted by Pierre Boulez. That's a great pedigree, and the results prove it.

If Turangalîla is the composer at his more Romantic, Canyons his more impressionistic side, then Chronochromie is certainly Messiaen at his most classical. That is, structural and coolest. It is, for some movements though, very heavy on the birdsongs.

I've discussed this era of his music, mid-50s into the 60s, with an expert in his music. Part of that conversation came down to this: Messiaen was getting to be more old-guard at this point, and his students had taken over as the vanguard. His Catholicism and post-Romantic leanings seemed like they were old-fashioned. In response, or perhaps under the influence of the proceeding generation, Messiaen's music became more atonal and arguably more strident. There are no resolutions on major chords here.

La Ville, a late work, feels like a compressed single-movement summation of elements of Chronochromie, Canyons, and other works in that time that haven't come up in the box set yet. There's a virtuosic piano solo in the middle, group voicings in woodwinds and strings, prominent mallet parts, more birdsongs.

Et exspecto is a work I've heard live, played by the Duquesne University Wind Ensemble. I'm certain I heard it on a program with Stravinsky's Concerto for Piano and Wind Instruments. And here's why this particular work gets some play: it can be played by a good-level university wind ensemble. I've just looked up that La Ville  for wind ensemble and piano, as are several other works.

For a number of years, I was hired as a ringer to play baritone saxophone in the Carnegie Mellon Wind Ensemble. They didn't have the majors to cover the part. I enjoyed doing it, and the money wasn't bad either.

Towards the end of those years, one of the directors (the job was split between several faculty members) programmed two Messiaen works for wind ensemble and solo piano. Great, I thought! Music I would love to play! Well, not so much. No saxophones in Messiaen's sound world. Darn it. 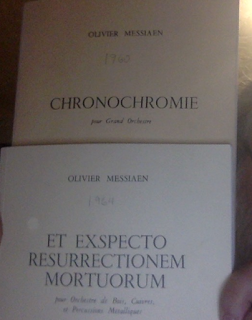 Pencilled price on the Chronochromie score: $120. Yikes.
Posted by Ben Opie at 3:28 PM