Yesterday I listened to Turangalîla-Symphonie twice through on CD, and even watched part of a performance on Youtube. I love and am moved by the work to that extent.

In the course of the box set, I now come to From the Canyons to the Stars, a slightly longer but quite different orchestral work. There are a few commonalities. Both are as much piano concerti as symphonies, with Turangalîla adding an ondes Martenot soloist; Canyons adds horn and mallet soloists. Then there's that Messiaen factor, how it simply sounds like this is his music.

Otherwise, the works are very dissimilar. Turangalîla reduces to piano solo at various points through the work, but generally it is dense, rich, with most of the ensemble active at any given time. Even its least active movement, "Jardin du sommeil de l'amour", maintains an underlying sumptuousness of sound. Canyons is almost the opposite. It's far more spare, even in ensemble passages. More time is devoted to piano solos. There are no broad harmonic cadences here. The former work hints at birdsong; the latter includes quite a bit of his birdsong transcriptions arranged for instruments. Several movements are specifically dedicated to birds.

Turangalîla is Messiaen's grand post-Romantic statement. Much of doesn't sound like 19th century orchestral music, but the effect is the same: excitement, passion, inducement strong emotional reaction. Canyons is his large post-Impressionist statement. Again, sounding nothing like Ravel, Debussy, or John Ireland, he's often painting an aural picture of his subject.

Canyons was inspired by a trip to the United Stated taken by the composer. He visited at least one canyon, and was inspired by the colors: layers of rich reds, oranges, browns, and the shapes of the formations. Bryce Canyon and Zion Park are specifically cited in the movement titles.

A lot of time has passed between the two works, and there are other orchestral works in between. Those works would probably be his most "modernist" sounding, though I'll get to that then those discs turn up in the queue.

The second half is on the next disc. 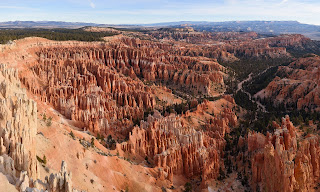