I took a day off from my Messiaen listening and posting, in case anyone noticed.

I excitedly bought this CD when it was released, particularly for the first work. I remember finding it to be disappointing. I didn't dislike it, but wasn't especially moved by it. I knew it was the composer's final work, and even then it was neither completed nor performed while he was alive. It's four movements, with a fifth never completed, and some of the orchestrations completed by others. I've also read that the second movement is a recycled version of an early work, a topic that will come up again before I've completed this box set.

Portions of the Concert sound especially late 19th-century, more than any of his works that I've heard dating past the 1930s. It's true of brief moments in the first and fourth movements, and essentially all of the second. It feels like an odd fitting with some of the composer's thornier piano writing in particular throughout the piece, which is more reminiscent of his composing in the 40 and 50s.

There is, as one might expect, dazzlingly virtuosic passages, particularly for the flute. It is played in this recording by Catherine Catlan, whose name I am unfamiliar. The other soloists are Heinz Holliger, Yvonne Loriod, and Mstislav Rostopovich, a great pedigree to be certain.

I'd rather have lesser Messiaen than none at all, but I don't see myself revisiting this work much more in the future.

All four works on this album, his two earliest extant compositions for orchestra and two of his last, all have a shadow of turn of the 20th century late Romanticism. It's not just that he's working with stretched but still present tonalism, but the broadness of expression is especially true of the early works. There's something of his melodic touch that comes through in particular on Offrandes.

Every composer has to start somewhere. The early works aren't bad, just not necessarily what I want out of this particular composer. If I'm going to dig through the majority of his work, then these pieces are essential for the continuity if not the originality. I understand the packaging of this collection; it's all individual CDs collected into a single box. They're organized more by instrumentation than chronologically. It would have been interesting to hear them in order of composition, though.

One more big orchestral suite on disc 25: Eclairs sur l'Au-Delà. And generally unlike this disc, back to Catholicism. 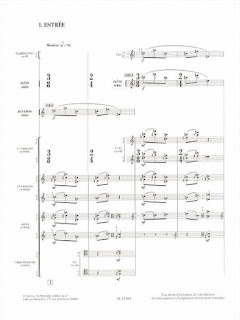