To Anthony on his birthday

I can't recall the first time I heard Anthony Braxton's music. He was a name floating around as I was starting to listen to Ralph Records artists and Sun Ra.

There's a slow monophonic duet piece on his duet record with Joesph Jarman, bells ringing, that I heard played on the old WYEP that really stirred me.

I was really moved by Graham Lock's book Forces in Motion. As in, I not only want to play this music, this is a person I want to be. During the days of Water Shed 5tet, I transcribed (mostly accurately) several of Anthony's quartet pieces for us to play. Those works always offered a view past my own limitations, ways of looking at both composition and improvisation that opened ideas.

We opened for his nine-piece Ghost Trance ensemble at the Three Rivers Arts Festival in 1998. He caught some of our set, and told me, "At last! Someone knows how to play my music right!" (I resisted the urge to say, "Yes, because we REHEARSE it.")

Through the years I've accumulated many Braxton recordings. It's a funny thing. He goes on about techniques, strategies, methods, and yet he's utterly intuitive.

I helped put together a Braxton mini-festival in Pittsburgh in 2008. It was an immense amount of work, but I'll never regret it. I get to chalk my name up next to all the other individuals who have recorded duet sessions with AB, for one thing.

Anthony turned 75 today. That in itself is a small miracle. He described to me his heart attack, how much he smoked and drank prior to that event.

I've currently been listening to a 32-CD box set of Messiaen's music. It's time to break from that and listen to what I think is possibly his best (group) performance: the Dortmund (Quartet) 1976 recording. This concert breathes fire. And its Anthony at his strangely-most-melodic. Not that it's so essential, but I enjoy this period.

Happy birthday to you, sir. 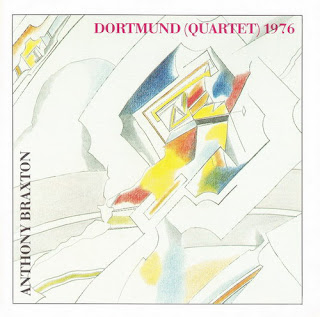