I'm back to listening to this work for the second time today. The first time, I followed along with the score I have, which once belonged to Easley Blackwood. It's falling apart, just like his copy of Vingt Regards that I now possess.

It's a large, long work, though neither his largest nor longest. The recording comes in at 79 minutes, just barely able to fit on a CD. It was recorded under the composer's supervision, Myung-Whun Chung conducting, Yvonne Loriod on piano and Jeanne Loriod on ondes Martenot. There's little doubt that he wanted this to be the definitive recording of this work. That's assuming you believe in such labels. Without question though, future performances and recordings would probably do well to refer back to this performance.

I don't follow scores particularly well, but I didn't get lost most of the time. I could generally follow one line or instrument group clearly, and most often the piano. The work is at times dense, and it's difficult for me to imagine someone really knowing this score. But it's not my field of expertise. It was nice to sometimes take in visually the various layers of events happening at any one time. There's so much activity in the piece, it's easy to miss the details.

There's an exuberance to this work, a joie de vivre, I don't often find in Messiaen's other works (much as I love them). There's also no specific Catholic subtext. The word "turangalîla", as any simple web search will uncover, is a compound word taken from Sanskrit. The first half refers to time, time which gallops or flows; the second means play, in a divine sense of creation and destruction, life and death.

I've read a bit about this piece. I've probably forgotten most of what I read. His intended subtext, which I think I do recall, is that this work is about passion, Earthly love, even physical love. That is most demonstrable in the sixth movement, "Jardin de sommeil d'amour" ("Garden of Love's Sleep"). It's painting a picture with sound: in a lush garden at dusk, two lovers recline and sleep, while a single bird sings its evening song. Specifically, Tristan and Isolde. The birdsong in this case is not a literal transcription, but a musical impression of a bird.

Some movements move from idea to idea with great rapidity; the second and eight movements in particular rarely sit on any one idea for very long. On the other hand, "Jardin" is mostly one idea (or one set of ideas) worked over for its length.

I found myself at the point of tears that first listening today. How could anything be so beautiful? I know that I'm exactly the sort of person receptive to enjoying a work such as this, unlike the players mentioned in my previous post. I find this music to be very powerful.

Messiaen completed this at 40 years of age. Not a young composer, but he still had nearly forty years of work ahead of him.

I think this piece stands toe-to-toe with the greatest of symphonic music, regardless of period. I don't throw the word "masterpiece" around lightly, but there it is. It's probably my favorite work for symphony orchestra.

Des canyons aux étoiles is next in the box set. It's a little longer than this. 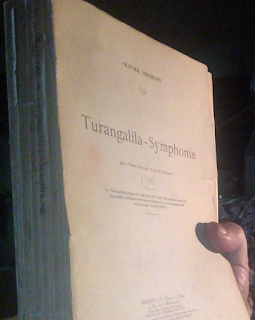 PS: You know that in the television show Futurama, Leela's full name is Turangalila?
Posted by Ben Opie at 5:51 PM