Disc 22 seems to be corrupted or misprinted. Thanks a lot, DG! Some high standards there. I have a physical copy of this work, but I can't find that either (it might be at school, inaccessible). I've done a checkout and streaming from the phone app hoopla. It's a sort of virtual library. I signed on with my Carnegie Library account. Ebooks, CDs, movies, audiobooks. I'll have to check more thoroughly, but there might be a recording or two of some Messiaen not included in this set. If I've gone this far, might as well take it all in.

Canyons continues similarly as before: generally sparer and less dense ensemble passages than Turangalîla, more time devoted to solo piano, focus on birdsongs. There is subtext, quoted inspirations, for some of the movements. Some sacred, some secular, all having to do with stars, deserts, stones.

I'll write again that I love his orchestrations. Those beautiful flute and clarinet lines (there's some virtuosic piccolo playing in this), the lush, deep brass chords, his use of mallets and gongs.

I didn't mention the wind sound he brings in now and then. One of those radio effects devices that you turn to simulate wind? I'm hearing several things at once, including possibly a brass mouthpiece (presumably the horn soloist). He's not just trying to evoke the wind blowing through the valleys of the canyons, he's raising it almost literally.

I suggested in my previous post that this was Messiaen's post-Impressionist work. I recalled a story that I read. Erik Satie attended the premiere of Claude Debussy's Le Mer (The Sea). Despite Debussy's disdain for the term, it's arguably quite Impressionistic. The first movement is "From Dawn to Midday on the Sea". Satie saw the composer afterwards and commented (and I'm not writing this verbatim), "I liked that section that was half-past 10."

I'd like to think this really happened. It's funny anecdote but it's a good reflection of my feelings about trying to "express" things in music too literally. I don't mean being expressive, that's something different. I mean programmatic characteristics, literally trying to tell a story in sound. I love Messiaen's music but he does engage in that sometimes.

I'm currently composed a set of pieces under the general title Meditations on Quarantine. There's one piece that is, appropriately enough, dedicated to the birds that seemed to have kept us company during the self-quarantine. But it sounds absolutely nothing like birds.

On the other hand, John Cage came to believe it was pointless trying to express anything in music. I understand his viewpoint but don't entirely agree with that attitude either. I like being thrilled or moved by music. What music, is a matter of my personal taste.

More large ensemble pieces on the next disc. Let's hope the CD works. 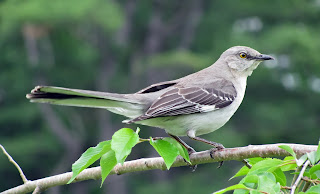