I took a few days off from Messiaen listening. I love much of the music but I needed to break from it a bit. There's only a single disc after this one, so I should have this completed tomorrow.

I was thinking of Gunther Schuller today. Gunther was not only a pretty fine composer in his own right, but a true scholar as well. I'm sure it was more than just a summer project like this venture is, but he'd listen to the complete recordings of particular jazz artists. As in, everything, including outtakes. That must have gotten tedious at times. His observation was that even among the very greats, you'd be hard pressed to find many who don't repeat ideas, rely on some stock riffs now and then. He said a notable exception was Charlie Parker. He could blow on the same tune three times and it could sound radically different each time.

I have a partial response to that, because I know what he says can be true. When Thoth Trio recorded our second album, we were comparing the two takes of "Nocturnal" we played. The version on the CD is a composite of the two; it's mostly take one with the second spliced onto the end, because the end was more accurate on the second take. Paul Thompson observed that he will use different takes to try to work out ideas, develop improvisations. He said my solos on each take sounded very different.

I don't write that because I'm comparing myself favorably with Bird. I'm at least as prone to riffage and licks as any other saxophonist. But it says something about how we each approach these things. I see every performance, including recordings and rehearsals, as an opportunity to attempt to explore. Paul is very methodical, and his logic of trying to develop ideas take-to-take is a sound one. (That said, he still preferred his first solo over the second.) So I question, when Mr. Schuller was listening to all of those alternate takes, if that was an attitude that some of those players had. If the ultimate result was to produce the best possible side or take, then maybe you need to work a few things out along the way.

This CD is also a grab-bag, including several alternate versions.

The early Theme and Variations for violin and piano is a brisk work, rather pretty, some of those Messiaen harmonies, there it is.

The Ascension. It was originally for organ. As I recall, three of the four original movements were orchestrated,  with a new piece replacing one movement. In an orchestral setting, it sounds more Debussy-like than almost anything else on this collection. He's an excellent orchestrator, even when not doing his more idiomatic writing for gongs, parallel-voiced woodwinds, ondes Martenot.

Poèmes pour Mi. I wasn't too enthusiastic about this when I listened to the orchestrated version. Here's the original setting for voice and piano.

I won't say I'm still especially excited by this work, but I think I feel more drawn to the sparer voice-with-piano setting. Bigger is not always better. I'd almost always rather listen to a jazz quartet than a big band.

Un Vitrail et des oiseaux (A Stained-Glass Window and Birds) is the oddball work here, a late piece packed onto a collection with pieces written more than fifty years earlier. It's more piano with (small) orchestra, no doubt written for his wife Yvonne. I always like these pieces, but there are similar works scattered through this collection.

Vocalise-Etude. Another very French-sounding piece, just a touch of that biting early 20th century harmony, but very clearly in the tradition of Debussy or Dukas. It is, I admit, a very pretty piece.


I'm attaching a picture of a grey catbird I scooped off of Wikipedia. I'm not a serious birder but I like to keep track of what's in my yard (and I try not to bore my friends with it). I identified one of these in my front yard for the first time yesterday. Its call does sound eerily like a young kitten mewling. I hope it returns. 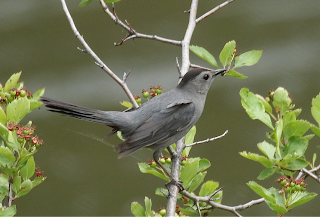