I had to skip two days in my Messiaen listening project. Real life has a way of rearing its head, and I just didn't have much of an opportunity.

Today sees me listening to the third and final act of Saint François d'Assise. I've been reading some commentary online about productions of this work. It's very long, complex, dense, requires a large orchestra and choir, has enormous technical requirements, and even requires three ondes Martenot. (ondes Martenots?)

One comment made was that Messiaen preferred the orchestra, the instruments, as the true conveyors of emotional content. I think it's clear when listening to this opera. I know it's partly my own bias in favor of instrumental ensembles, but the most interesting moments in the work overall tend to be the instrumental sections. There is some gloriously dense writing for the choir in the third act, where the vocal ensemble is more prominently featured than any other section of the opera.

Indeed, I find the third act to generally be more dramatic (there's that word again, I must consult a thesaurus) than the previous acts. In the libretto, Francis is experiencing the stigmata, and then death and resurrection.

It's huge, colorful, builds wonderfully, and still occasionally refers back to previously stated musical phrases and ideas. But it's taken a really long time to get to this point.

I recognize a use of repetition in this work that is similar to that of Turangalîla. There's a particular musical phrase that the orchestra plays, an especially Messiaen-like melody, that pops up many times in the opera. I haven't counted how many, but I'd guess at least a dozen. Usually it's after a vocal phrase, most often played in unison but sometimes is harmonized.

I don't think of this as a motif or leitmotif, more like a musical marker, signpost, or perhaps punctuation. There's a brass chorale in Turangalîla that is used similarly. There are several such phrases in Saint François.
I've read that comment, more than once, that the size and scale of this opera is comparable only to the largest of Wagner's operas. I'd argue that Stockhausen's seven cycles of operas that make up Licht are in some cases probably equally complicated and huge, though those are even less traditionally "operatic" than this work. I mean, the Helicopter String Quartet alone, taken from Wednesday from Light, is a monumental undertaking.

I can't state what I think a composer should have done, only what I would be preferred. I'll stress the point again, it's a long work. An hour less of material, I think I would have been more engaged with the piece.

But without seeing the work in person, which I suspect I will never have the opportunity to do, it's a paled experience compared to being there in person. Would I be enthralled from beginning to end, or would I be waiting for the the thing to wrap up? I can be very patient with some things, and very impatient with others, but I suppose we all can be like that.

Will I listen to this opera again? In fairness, I didn't listen to it all in a single day, so that's cheating a bit. If I do, I might skip to the final act. 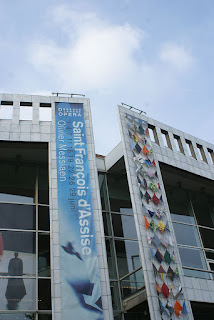