Two discs to go after this. These and the previous few of been mixed bags of content, though there's great content contained therein.

If I've learned anything from this listening exercise, it's that I definitely favor Messiaen's music of the 1940s above all else. Trois petites liturgies finds him in his prime. Yes, it's Messiaen at his churchiest, but as I've written before: if more church music sounded like this, I might actually attend once in a while.

It's a relatively modest work compared to the size and length of Turangalîla, or the length of Vingt Regards or even Harawi, the composer packs a lot into its 34-minute length. It is scored for, in the composer's listed order: piano solo, ondes Martenot, celesta, vibraphone, percussion, women's choir, and string orchestra. That's not a simple assemblage of musicians to gather.

It's another example of wishing I could be in the room when this is performed. I guess that could be said of anything; I'd love to be in the hall again to see Turangalîla.


Colors of the Heavenly City. I am on board for these 50s and 60s works. I don't mind that they're more strident than the the earlier works, but I find the 1940s pieces to be Messiaen at his prime and....most natural. His voice, most directly.

But is that fair for me to write? I don't know. Couleurs has the colors one might expect from a Messiaen piece: virtuosic piano, gongs and mallets, atonal brass chorales. But he's determinately avoiding anything resembling triadic harmony. Maybe that's what he wanted, or maybe it's what he did to stay current.

Hymne sounds quite a bit like Bernard Herrmann at the beginning, though there's a chord sequence that looks forward to Turangalîla.

Has it taken 30 CDs of Messiaen's music to say I've had enough?

I'll say no, because I know there's one classic work left. Visions de l'Amen. I'll push on, even though I find this particular work uninteresting. And I love both Messiaen's and Herrmann's music. 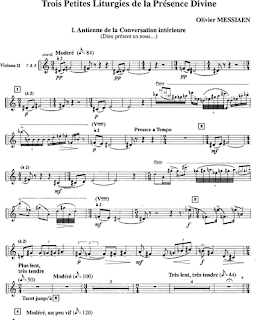