Disc 25, seven more to go. There are a few more orchestral recordings after this one, and then it's into the chamber music.

Keeping this blog going on a daily basis, listening to Messiaen and writing my thoughts, I don't know know how much more I can say to describe his music. I'll write a few things about this work later, but I'll go on a semi-related tangent first.

My daughter Jeannine has been staying with us for almost three months. She has been living in Brooklyn for years. When the pandemic hit and New York in particular was crushed by it, we urged her to get back to Pittsburgh and chill. None of us knew for how long, and thankfully she's able to work remotely.

We've done something in the city most Saturdays since her return. Sometimes it's walking those long Pittsburgh stairs, the longest of which is in Fineview (a neighborhood I don't think I've ever visited). Something that came up on her radar was St. Anthony Chapel in Troy Hill. The chapel boasts the largest collection of religious relics, over 5,000, in North America. I knew nothing about it, but, I was game to look.

Yesterday we we able to walk in, our third attempt to go. The first time, everything was locked up. There were four women in the parking lot, playing a game of bingo, as they might have any other Sunday. The second time, the chapel was closed because the wife of a worker had contracted covid-19.

Third time, we're in. It's a small church and it's pretty amazing inside. Before you come to any relics, you're flanked on each side by life-sized depictions of the Stations of the Cross. Above those is some wonderful stained glass depictions of various saints.

The room narrows, and that's where some of the relics are. Most of them are bone chips not even the size of a grain of rice. There's an occasional knuckle, and even a full skull. That's what's on display along the left and right aisles; there is much more behind the altar, many housed in beautifully constructed and decorated German casings. Supposedly there's a splinter from the cross of Christ, and a single thorn from the crown of thorns.

Well, without meaning disrespect to Catholics in general, I call bullshit on those two.

Can objects be imbued with magical power? When a significant person touches or uses a tool, does he or she leave some sort of energy behind on it? I had to wonder that when I visited the Rock N Roll Hall of Fame in Cleveland, seeing row after row of guitars played by various people.

Truth told, I thought those could be given to some poor struggling kid to continue the legacy. There's no magic there.

My friend Reggie Watkins befriended Jimmy Knepper late in Jimmy's life, and the family gave him Jimmy's trombone. The one trombone he used since the 50s. Okay, that impresses me. It's the trombone on Mingus Ah Um. Damn.

What would I do if I could play Ornette Coleman's plastic Grafton saxophone? (Assuming it still exists.) I'd hesitate, but ultimately, yes I'd play it.

Returning to the RNR Hall of Fame: the most memorable (and chilling) objects in the collection were the pieces of the airplane fished out of Lake Monona. One piece had the name Otis, the second the name Redding. If you do believe in magic, those are certainly cursed.

As for Catholics and their relics...were it not for the fact that Catholicism is old and established, people might find this collecting of body parts of religious leaders and martyrs to be insane. And suppose that splinter from The Cross was real. If I came into physical contact with it, would I suddenly be filled with faith? Or, struck down dead due to my lack thereof?

None this commentary is meant to cast aspersions on Messiaen's faith. If it is something that inspired him, drove his creativity, then I'm grateful. Well, I'm grateful for the inspirational and mystical side of Catholicism. Let's leave the less pleasant history of the Catholic Church aside for the time being.

And what of Eclairs sur l'Au-Delà? It's nice. It's a good piece. It's nothing you haven't heard from this composer before, but it's a worthy listen being the composer's last fully completed orchestral work. At this time in his life, he has (as I put it in an earlier post) earned the right to sound like Messiaen.

It's not for me to say that this work should have been shorter. BUT...if it was half its length, I'm certain it would be played far more often. I'll take it as is, though. 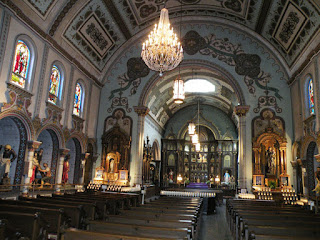