In keeping this blog, I'm reminded of a few basic facts.

I'll get to the music eventually.

First, I'm a sloppy proofreader. I write these blog postings rather quickly, and I've found that I've had to go back and correct grammar or clarify diction.

I'm not a great writer either. It just wasn't my calling, nor did I get involved with serious writing early enough in my career to really flex my chops. I am catching myself removing unnecessary words sometimes; I just removed the word "some" in the prior sentence before both "grammar" and "diction". It's an extraneous word. I also have been trying to avoid using the same descriptors often.

I have a friend, someone I know mostly from online interactions, but I have been around face-to-face. He's an excellent writer, and creates cogent and articulate statements, whether it's on a blog or even Facebook. He let on that he had been reading my blog posts. I thought, "What am I doing?"

Indeed, I can once again question this entire venture, modest as it may be. So what, I bought a big collection of Messiaen CDs, why write about them? Who even cares about my opinion? It's not as if I'm writing a serious review, or approaching anything resembling dedicated musicology.

I am concerned with digital noise. When I consider the internet, I sometimes think of Terry Gilliam's Brazil. The setting of the film is a society which is being crushed under the weight of its own bureaucracy. (My favorite scene is when Robert DeNiro shows up as the renegade plumber.)

I sometimes think of this when I find myself responding to Facebook postings. I stop and think, "Who cares? Why add to the blur of digital garbage? Who cares what you think?" That thought thankfully stops me, in some cases.

I guess I'm doing this for myself. I've touched on this before. I want to keep productive, keep a regular schedule during not only the summer but this pandemic. I pull weeds in our garden every day, for example.

I also want to experience something positive and express a few thoughts about it, even if they are not particularly deep. One could do the same for any great artist, find a large collection of his/her works, listen to those pieces on a regular schedule, write about it. I'd like to think it's a positive activity, and it seems to me we need more of that.

So if you've been following this, actually reading through my ramblings, have enjoyed or inspired by them in any way, wonderful. And thanks.

Which brings me to this CD! Harawi is subtitled "Song of Love and Death". I haven't done this before, but the Wikipedia page is informative, so why should I copy it?
https://en.wikipedia.org/wiki/Harawi_(Messiaen)

I've gone on about my general dislike of vocalists and preference for instrumentalists. I have to say though, I find this piece to be beautiful. Listening to the majority of these discs confirms my preference for the composer's work in the 1940s. The majority of my favorite works of his were written between 1940-1951. He's sitting in an area that hasn't given up entirely on triads, but is broader and more modern sounding than his earlier, more blatantly post-Romantic composing style. What big, broad statements, too: this is about an hour's worth of music. And this is the period when he's composing the massive Turnangalîla, and the two-hour piano cycle Vingt Regards.

Unsurprisingly, it sounds like a demanding work for both pianist and especially soprano. There's a point near the end of the eighth movement where I don't know how a vocalist can deliver such a long, percussive line without breathing in the middle. It's the more still moments though, long notes in the voice, simple chords with bird-like melodies (mvmt. ten) I find the most striking.

The Trois Mélodies, an early work, has a touch of what turns up in the later Harawi. What might that be? I'm not doing anything in the way of serious analysis, but the first chords in the piece sound like the composer's hand. It's just an intuitive sense from having listened to so much at this point.

La mort also dates from 1930, this time set for soprano, tenor, violin, and piano. Death of the Number? I have no idea of its meaning, and I've decided not to look it up. There's still that touch of Messiaen harmonies, but this one really sounds like 19th century Romanticism to me. That's not so much for me. 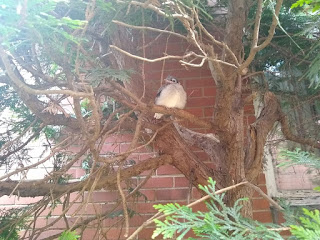 This is a blue jay fledgling we found in our yard two days ago we named Baby Blue. I heard it this morning in a neighbor's yard. I hope it survives.
Posted by Ben Opie at 6:12 PM