And so, through the course of this 32-CD collection, we come to this odd grab-bag of works.

And oddest of all would have to be the works for ondes Martenot. Assuming anyone reading this doesn't know anything about this instrument, it is an electronic keyboard instrument invented in 1928 by Maurice Martenot. In some ways it's a bit like a tamed and cultured theremin. I understand both rely on a heterodyne (different tone) for basic sound production, though the ondes Martenot has a much wider timbral range. I read that Leon Theremin himself felt ripped off by Martenot. The keyboard permits for much greater pitch accuracy, but there's also a wire with a ring that gives you the possibility of long glissandi. Like the standard theremin, pitches are controlled with the right hand, attacks and volume the left. Oh, just look at an image of one being played, taken from Wikipedia: 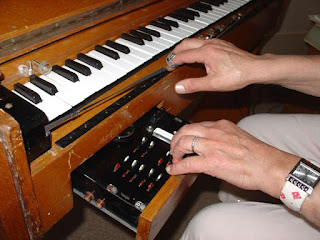 Most of the literature for the instrument is by French composers: Jolivet, Milhaud, Charpentier, etc. I was thrilled to find a copy of this LP at a Goodwill two years ago for $1.29: 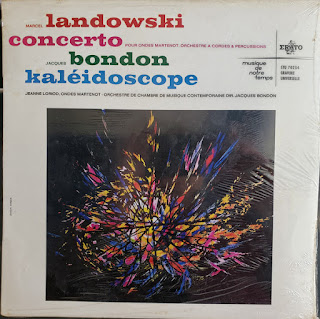 And of course Jonny Greenwood of Radiohead has been playing one, or a more recent knock-off (I can't say which) since the time of Hail to the Thief, I believe.

As for the piece, it is such a curiosity. The ondes Martenot is monophonic, so this piece collects six of them at once. From what I can tell, there's a lead voice with five to accompany. The first impression I had on initially listening to this work was that it sounds like an underwater soap opera organ. Not kind, I know. The piece is divided into eight (I think, there's a typo in the notes) movements which are more-or-less played continuously. Each movement refers to either water or fireworks, so he's in full programmatic mode here.

The fourth movement, "Water", I've heard separately under the title "Oraison" ("Prayer"). It is a standout to be certain, and sounds most natural in the setting of multiple ondes Martenot. (What is the plural of ondes Martenot, anyway?) It's such a standout that he recycled the movement note-for-note as the cello and piano duet in Quartet for the End of Time.

I'm previously unfamiliar with the Inédits (unpublished) works for ondes Martenot and piano. There's no year give but it unquestionably has the sound of a youthful work. It's performed by his wife Yvonne Loriod and her sister Jeanne.

I don't mean to gloss over the topic, but there was some conflicts and unpleasantness in Messiaen's personal history. Yvonne was his second wife; his first wife was a violinist. Being Catholic, he couldn't divorce his first wife to be with his second, and there's something about the first being institutionalized. I don't want to write more than that because I haven't read about it in detail. He did wind up coupling with an extraordinarily talented musician and interpreter, and by all accounts they loved each other deeply.

Le Merle noir was one of the first Messiaen pieces I heard, the flute in that recording played by Severino Gazzelloni. I liked dropping that name because Eric Dolphy composed a piece entitled "Gazzelloni". Merle is a great little piece, a showcase for the flutist in particular.

As if these pieces weren't all different enough from each other, this is followed by the Five Refrains for a capella mixed choir. It might be interesting to play movements of this next to movements of his orchestra music, because I hear strong similarities. The use of parallel moving harmonies for example, or the percussive syllables in the first movement that sound like a substitute for wood blocks in the orchestra. I guess I like hearing that this is, unlike the Chant, unquestionably idiomatically Messiaen.

The disc ends with another oddity, a work for full choir and large orchestra, that clocks in at a little over 3.5 minutes. Ummmm, is that all? He goes on for so long sometimes, and here I say, more, more!

Next disc is more odds and ends, if you can count his most famous composition as an odd or an end.

Below is a screen shot of recent viewing stats of this blog. Turkmenistan??? 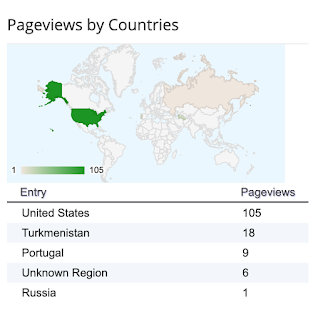