And here we have it. The masterpiece, at least in my humble estimation. I have so many thoughts and recollections regarding this work, I find it difficult to organize what it is I might write.

Of all of Messiaen's compositions, this is the only one I can recall hearing played twice. The first was by the Carnegie Mellon Philharmonic some time in the mid-1990s. They had string of a few years in which there was some sort of modern and unusual programming for their big spring concert. Others included an all-Xenakis concert (with the composer in attendance), all-Scelsi, and the last being an all-George Crumb series in 2002 (again with the composer in attendance). I know there was some pushback at throwing the resources of the department into such ambitious projects. The Scelsi concert, and almost certainly the performance of Turangalîla, were each more than a year in preparation and rehearsal. At least I enjoyed them.

It was wonderful to hear Turangalîla performed, and the ensemble did mostly a good job. I knew the work well enough to know that the extremely difficult seventh movement was pretty ragged, but it never fell completely apart. It's quite dense at times and has frequent and sudden tempo changes.

The work calls for such a large orchestra that ringers from the community needed to be hired. That included several of my friends. I saw Lisa Miles after the the performance, and told her about what a joy it was for me to see this work performed. She told me that many of the students absolutely hated it, complained frequently about having to play it, how ugly and unmelodic they thought it was. Taste is personal, but I found that attitude surprising. I guess if all you want to play is Mozart and Haydn, you might feel this way. But then, if you are hired to play in an orchestra (or any ensemble), and you don't like particular music that's programmed, SHUT UP. Play that music to the absolute best of your ability and don't say a damned word about your opinion. Otherwise it makes you a shitty musician, no matter how amazing you might be. And if you're a student, learn something from the experience.

The second performance I attended was by the Pittsburgh Symphony Orchestra, a good decade or so later. There was something of a promotional build-up leading to that weekend, having to do with the history of the work in Pittsburgh.

It's easy to forget now that at one time Andre Previn was the principle conductor of the PSO. In 1977, he decided to program Turangalîla for three consecutive days (this was customary at the time). In looking up the date, I was very interested to find that the piano soloist was Pierre-Laurent Aimard (whose recording of Vingt Regards is considered by some to be definitive) and the composer's sister-in-law Jeanne Loriod played the ondès Martenot.

The story goes that the audience couldn't run out of the hall fast enough during the first performance. On the second night, Andre gave an impassioned (and possibly angry) defense of the work, and the audience mostly stuck around.

For the most recent performances, the conductor came out in advance of the concert and talked through some of the elements of the work. His commentary probably helped a little. Most people stayed, but there were those who walked out.

I was teaching at CAPA High School at the time (Creative and Performing Arts). I was very excited and talked up the performance to teachers and especially students. PSO members would semi-regularly come to the instrumental department and give short recitals. One player came around this time; I think he played second violin. I asked him about Turangalîla, and he took on a look of mild disgust. He said thought the piece should be shorter, and then it might be played more often. I think he was just avoiding saying that he hated the work and didn't want to have to play it, similar to those CMU students before him.

Well, screw him. There are shorter and more modest Messiaen orchestral works, but I'm going to venture a guess they don't get played as often as this piece is. Because this is Turangalîla. Top of the mountain.

So far I haven't mentioned a word about the music. I think I'll save that for a subsequent post. Maybe I'll even listen to the piece again. 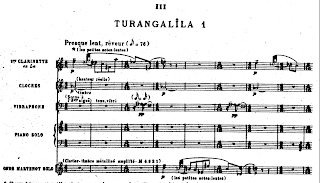